I don’t know exactly why, but it seems that when I make a homemade pizza, everything seems OK. Maybe it’s my Neapolitan heritage, but when the simplest of ingredients come together and cook in just a matter of minutes, for me, all’s well with the word. 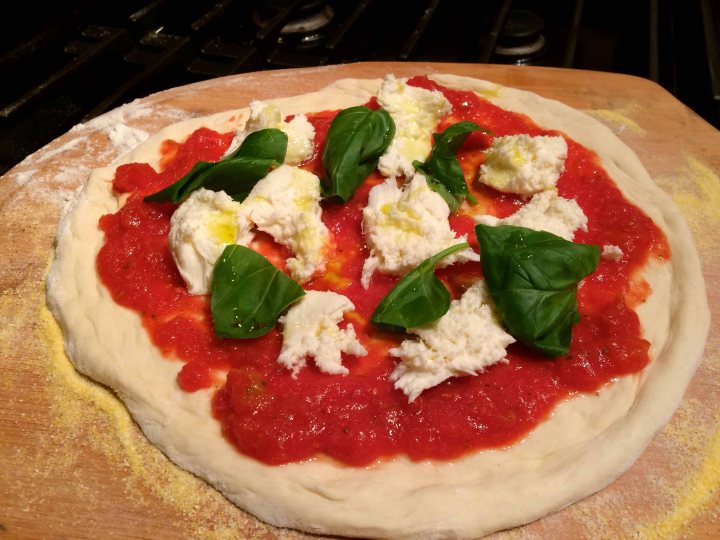 Let others enjoy the “gourmet,” multi-topping pizzas so popular today; for me, a plain Margherita is the only way to go.

In a house with a kitchen dominated by two women, one Sicilian (my mother), the other Neapolitan (my aunt), it was rare that my father took to the stove. Born around Naples and coming to the States when he was around 10 years old, he only cooked twice that I remember. And only once did he share a recipe with me. (I can’t remember why but no one else was at home.) It was a recipe so simple that he must have leaned it as a child back in his home town, Cappacio, in the province of Salerno.

END_OF_DOCUMENT_TOKEN_TO_BE_REPLACED

After numerous requests from my husband for stuffed cabbage, I set out to make the dish. The recipe is from a now cancelled series on the Cooking Channel that featured Laura Calder, a Canadian chef who focused on French cuisine. In fact, I had made this dish with some success about five years ago; however, last night’s attempt was an epic failure.

Some of the responsibility for my culinary mega flop is mine. Rather than buying the savoy cabbage called for by the recipe, I mistakenly purchased a Napa, or Chinese, cabbage since it was marked “Savoy” on the shelf.

END_OF_DOCUMENT_TOKEN_TO_BE_REPLACED

Failing to go shopping on Sunday left us with limited choices for supper. Sure, we had plenty of pasta and cheese on hand, but I had served pasta the night before. There were also a few dishes we had in the freezer, but defrosting would take too long. A search through the fridge yielded a fresh supply of eggs that eventually led me to prepare a long-time favorite: Uova in Purgatorio, or Eggs in Purgatory.

END_OF_DOCUMENT_TOKEN_TO_BE_REPLACED

Serendipity triggered this post. A few weeks ago, a loyal reader in a comment recommended Mario Batali’s 2005 cookbook, Molto Italiano, averring it to be his best ever. I ordered a used copy of it online, and on the day it arrived in the mail, my supermarket had a half-price sale on pork that made a 4.3 perfectly butchered shoulder roast irresistible. This confluence of events ultimately led me to a recipe in Batali’s book for “Braised Pork Black Rooster.” The barnyard moniker derives from the Gallo Nero, Italian for “black rooster,” the emblem of the consortium for Chianti Classico, the wine called for in the recipe. Given my predilection for Chianti, I simply had to make this dish.

END_OF_DOCUMENT_TOKEN_TO_BE_REPLACED

A frittata, an Italian omelet,  was one of my family’s go-to dishes for Friday suppers or Lenten meals, when as devout Catholics, we needed to abstain from meat. I remember how my aunt hovered over the frying pan in which she had just sauteed the fritatta’s filling, which ranged from onions and peppers to left-over spaghetti to potatoes, to even a hunk of fresh ricotta. Using a wooden spoon, she would gently push the setting eggs towards the center of the pan, allowing the uncooked portion to take their place.

END_OF_DOCUMENT_TOKEN_TO_BE_REPLACED

Perhaps the most classic pasta from Puglia, orecchiette, Italian for “little ears,” provide the perfect shape for one of the region’s most popular dishes, Orecchiette with Broccoli Rabe and Sausage. Italian food authority Michelle Scicolone explains why in her Williams Sonoma cookbook, Essentials of Italian: “As you toss, both ingredients [broccoli rabe and sausage] become trapped in the hollows of the ear-shaped pasta, making every bite wonderfully flavorful.”