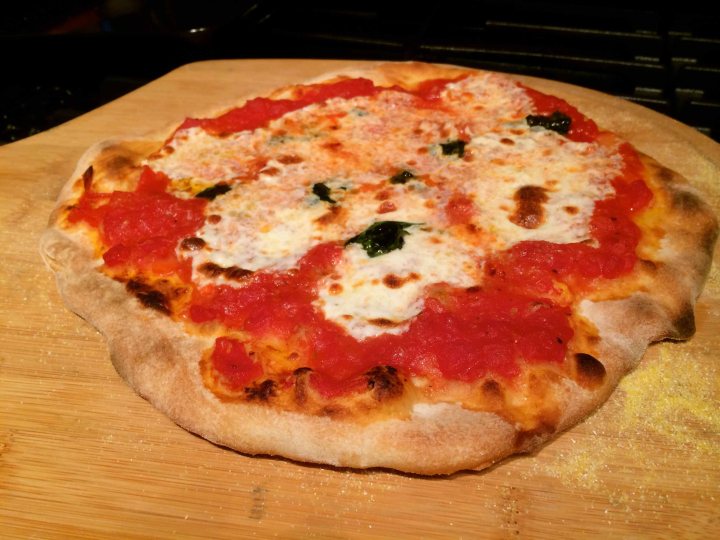 My quest for the perfect pizza continues. But after last night’s attempt, I’d say that I’m pretty close to achieving my goal. A few weeks ago, fellow food blogger, Diane Darrow, sent me a link to what I believe to be the best recipe so far for my pizza dough. And so far, I’m sticking with it.

However, my last two posts on pizza switched the focus from the dough to the cooking medium and highlighted Breville’s “Crispy Crust” pizza oven. This counter-top appliance yields very good pizzas with a nice balance between the crisp and chew factors. But after experimenting more with this oven, I felt that its size limited me to making smaller pizzas, about 10 inches in diameter, if I wanted to achieve a balanced crust.

After my first post about the Breville oven, Ms. Darrow wrote to me, saying that she had discovered another tool that promised even better results than the Breville. Last week, she posted a story about it on her blog, Another Year in Recipes.

Named  “The Baking Steel,” it’s a 1/4-inch thick slab of steel weighing 15 pounds that’s preheated for 45 minutes in a 500° or 550° oven. Like a pizza stone, it provides a hot surface on which to bake a pizza, but does so at an even higher temperature.

Following Diane’s post, I read more about the steel on Serious Eats. It provided directions for achieving excellent results with the steel by cooking the pizza in the prescribed preheated oven on the second highest rack, but right before putting the pizza into the oven, you turn the broiler to high. Serious Eats has a richly illustrated story on this method.

After reading both blogs, I thought that the steel’s 16” x 14” inch surface would allow me to make larger pizzas, so I went to the manufacturer’s website and ordered one. It arrived the next day.

Last night, I used it for the first time. I’m a convert. It worked as advertised and delivered the best pizzas I’ve made to date: one Margherita, pictured above, and one mushroom, pictured below. I was hesitant to cook the pizzas so close to the broiler so I placed the steel on the third position in the oven. And although they took about 6 minutes more than those on Serious Eats, they were perfectly cooked with an even better balance between the crusts’ crisp and chew factors.

I’m sure that I shall experiment further and next time I will probably take the plunge and move my steel to the higher rack.

One word of caution: if you’re like me and don’t have an air-conditioned kitchen, between the pre-heating and the baking, it does get quite warm in there.

I recommend reading both blogs to learn more about this tool and, if you’re still interested, going to the manufacturer’s website.