One of the dividends from slow cooking is definitely the leftovers. Even if you’re simply reheating them, they can often be even better than the first time you served them.

Yesterday, I pulled from the fridge some slow-cooked pork ribs in smoked Spanish paprika sauce that we had on Sunday. On their own, there wasn’t enough left for two portions, so I decided to turn them into a ragu for pasta. (See my May 26th post for more about the ribs.)

For almost any rich, meaty sauce, my favorite variety of pasta is pappardelle. The name for these broad, flat noodles comes from the Italian verb “pappare,” which means “to gobble up.” Their heft and shape make them the perfect carrier for a thick ragu.

After skimming the congealed fat from the ribs, I removed the meat from the bones and shredded it, discarding any thick pieces of fat. I placed the meat and the sauce into a heavy-bottomed sauce pan with a little water and heated it over a low flame, with occasional stirring, for about 30 minutes. After 10 minutes, I also added some milk to the sauce for a creamier texture.

I cooked the fresh pappardelle for 2 minutes in heavily salted water. Just before they reached the al dente stage, I transferred the pasta from the pot to the skillet with a spider-style strainer and tossed the noodles with the sauce for about 30 seconds to coat and finish cooking. 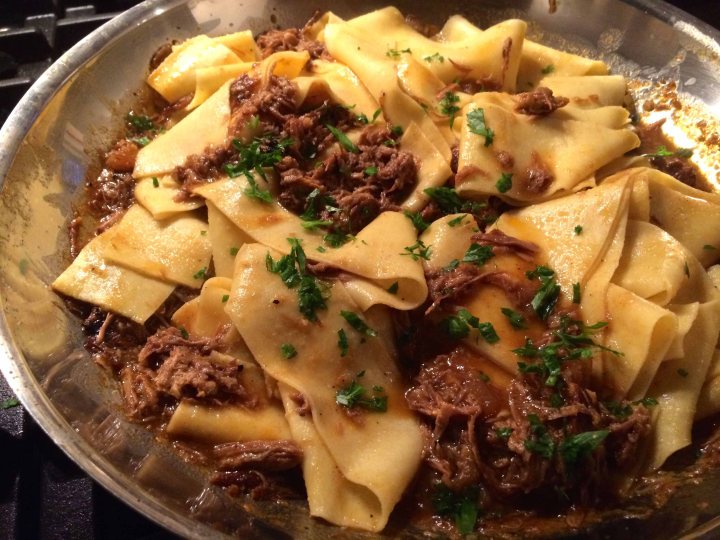 Off the heat, I added a handful of grated Romano and some parsley.