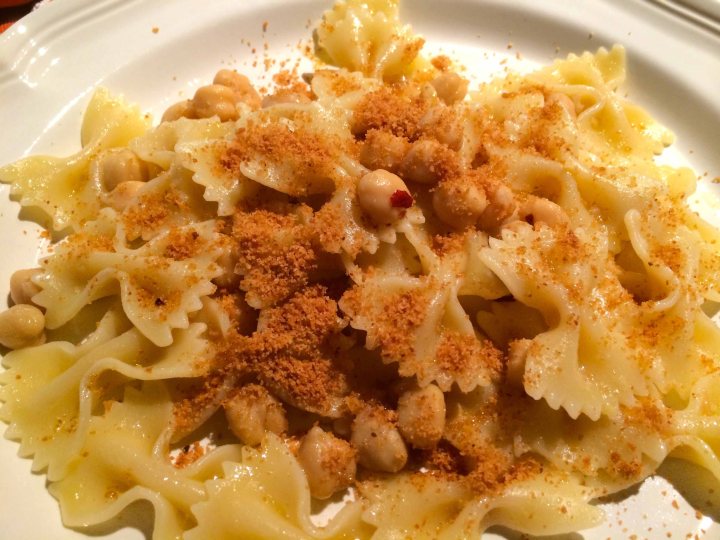 Having survived the Great Depression, my Sicilian mother often spoke of those days when her family didn’t have much and had to make the most of what they could afford. Pasta Ceci, a simple mix of pasta and chick peas, was one of those dishes from my mother’s past that she continued to make frequently, even after her fortune improved.

Because it was so inexpensive and easy to prepare, I too made it many times when I was in grad school. I still remember when I first called my mother up for the recipe and how surprised and happy she was to share it with me. Although I have tried and enjoyed other recipes for this dish, it’s the one my mother shared with me that remains my favorite.

To prepare the beans, place the water, olive oil, garlic, and bay leaf in a small sauce pan and cook covered, over medium-low heat for 5 to 7 minutes.

Add the chick peas, cover, and cook over low heat for about 10 minutes. When finished, remove the bay leaf and taste for salt. Keep warm.

While the chick peas are cooking, prepare the the topping. In a small skillet, heat the olive oil over low heat for one or two minutes. Add the breadcrumbs and toast until light brown. Stir often, to avoid burning the crumbs. When toasted, place aside.

At the same time, prepare the finishing oil. In a small skillet, heat the oil, minced garlic, and pepper flakes over low heat for about 10 minutes. The garlic should become fragrant and take on only a minimum of color. When finished, place aside.

Meanwhile, in plenty of boiling, well-salted water, cook the pasta, according to package directions, until al dente. Before draining, reserve a cup of the pasta water.

After draining, place the pasta in a warmed serving bowl, add the chick peas and their cooking liquid. Toss lightly; if too dry, add a tablespoon or two of the pasta water. Add the finishing oil, followed by half of the bread crumbs. Toss lightly and serve. Sprinkle the remaining breadcrumbs on the individual portions of the pasta.