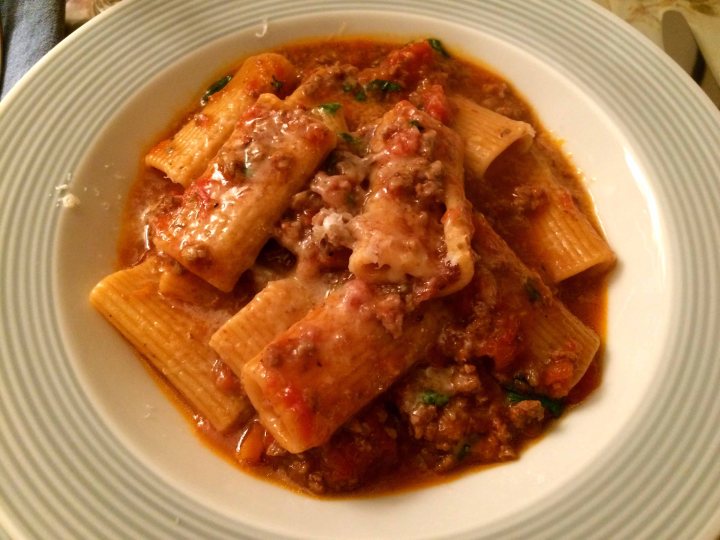 As some of you may know, I’m a fan of the pressure cooker for weeknight suppers—especially when getting home after 7. It allows me to prepare comfort food quickly and with minimal effort. Nevertheless, I have shied away from using it for pasta dishes, until I came across a recipe titled “Weeknight Meat Sauce with Rigatoni” in America’s Test Kitchen’s Pressure Cooker Perfection with a cooking-under-pressure time of 5 minutes.

What appealed to me most about the recipe was that, unlike so many that abound for pressure cooker pasta, it wasn’t loaded with cheese and seemed to allow for an al dente pasta by finishing its cooking without the lid after the steam was released.

I’m sure that my purist friends will balk at this recipe and may question my loyalty to authentic Italian cooking.To them, I must concede that the end product of the recipe has far too much sauce for my liking. Indeed, it calls for 28 ounces of crushed tomatoes, a 14.5 ounce of can diced tomatoes drained, and 1 tablespoon of tomato paste.  Moreover, I was disappointed that it uses oregano and red-pepper flakes while its introduction claims its goal was a “sauce with the flavors of a Bolognese” is misleading.

Despite these weak points, I was pleased with how this dish turned out. Cremini  mushrooms, which were browned along with chopped onion, were a nice complement to the ground beef, adding to the meatiness of the sauce. I also added some ground nutmeg to the browned meat as I do when preparing a traditional ragù Bolognese.

Although I know I will never achieve the heights of a true ragù, I plan to experiment with this recipe after the holidays, using more traditional ingredients and definitely far less tomato.

An  adaptation of the original recipe can be found here: http://www.comfycook.com/2014/05/weeknight-meat-sauce-with-rigatoni.html