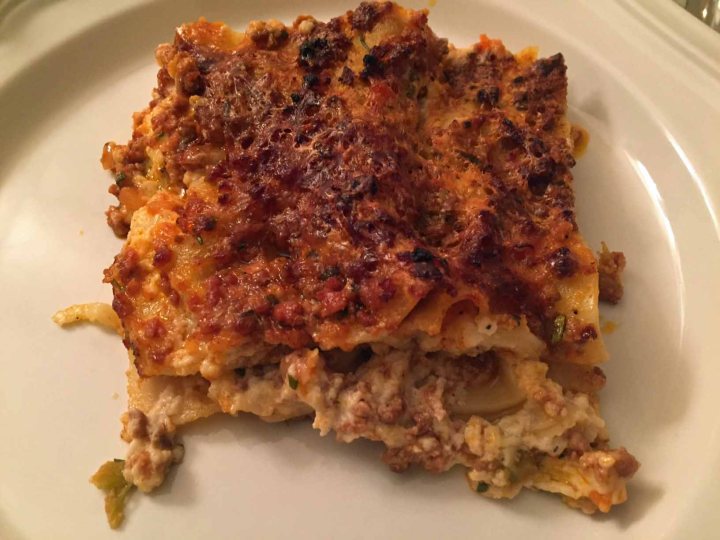 My aunt, being Neapolitan, always made a southern-Italian style lasagna. Her’s was more restrained, with fewer fillings, than others I’ve had or read about, but it followed the classic formula of a long-simmered meat sauce, mozzarella, ricotta beaten with egg, parsley, and pecorino, and dried pasta noodles. In a 9” x 13” baking pan, she’d spread a thin layer of sauce, then laid down a layer of boiled noodles, coated that with a layer of ricotta and a few slices of mozzarella, followed by a coating of sauce, a sprinkling of cheese, and then on to the next layer, until she reached a total of four or five layers. The hardest part was waiting the 20 minutes after it was baked so that the lasagna could be cut more easily and served in slices. Just the thought of it is making my mouth water. Never served on a weekday, my aunt’s lasagna was reserved for holidays (even Thanksgiving), some birthdays, and once in a while for a Sunday dinner.

It wasn’t until the 70s, when northern Italian cooking swept the US, supplanting familiar Italian-American dishes with their northern counterparts, that I encountered Marcella Hazan’s classic Bolognese version of lasagna. It replaced the tomato dominated sauce with a more complex, meat-centric one and the beaten ricotta with a creamy béchamel sauce. Gone too were the pasta noodles superseded by thin sheets of fresh pasta; nutty Parmigiano-Reggiano took the place of the saltier pecorino; and mozzarella didn’t even make its way into the mix. Given the time it took to make this version, however, I found myself preparing lasagna far less often than my aunt had.

But recently, I came across a recipe for a weeknight lasagna by television’s Rachael Ray. Her version uses a 30-minute meat ragu, a classic béchamel, and no-boil pasta sheets as an alternative to home-made egg pasta. So on a Wednesday night, I though why not give it a try.

To give her relatively quick-cooked ragu more intense flavor, she uses tomato paste and chicken stock as the base of her sauce, which begins with the traditional soffritto (sautéed onion, celery, and carrot). Veal and beef, mixed with rosemary, sage, and bay leaf, are then lightly browned in the same pot, followed by a splash of dry white wine. A good amount of tomato paste is then incorporated into the meat, followed by three cups of chicken stock. The sauce is then simmered for about 30 minutes, or until thick.

While the sauce is cooking, you can prepare the béchamel, which starts with a light roux and ends with the addition of warm milk, whisked and cooked gently until it thickens.

The baking pan gets a thin coating the cream sauce, which is then topped with the no-boil pasta sheets. These get thin coatings of béchamel and ragu and a sprinkling of Parmigiano. These steps are repeated until you have four layers.

The lasagna is baked in a 375°F oven for an hour, or until browned and bubbling. (If using fresh pasta, the cooking time is 30-35 minutes.)

Although I was skeptical at first, (the reason for so few photos) I was more than pleased with the results. Nevertheless, I did make some changes. I added some canned San Marzano tomatoes, about a cup, to the sauce to give it a slightly brighter tomato flavor. To achieve what I thought was the appropriate thickness for a ragu, I cooked my sauce for almost an hour. In place of some ground cloves to be added with the herbs to the meat, I substituted the more traditional freshly ground nutmeg.

Purists among my readers may cringe, as did I, at some of the elements of this recipe. And while it may be a far cry from my aunt’s as well as from Hazan’s classic Bolognese version, it makes a wonderful baked-pasta dish for a weeknight supper.

Here’s a link to her recipe, which is accompanied by a video of her making the dish.

One thought on “Lasagna with Meat Ragu”