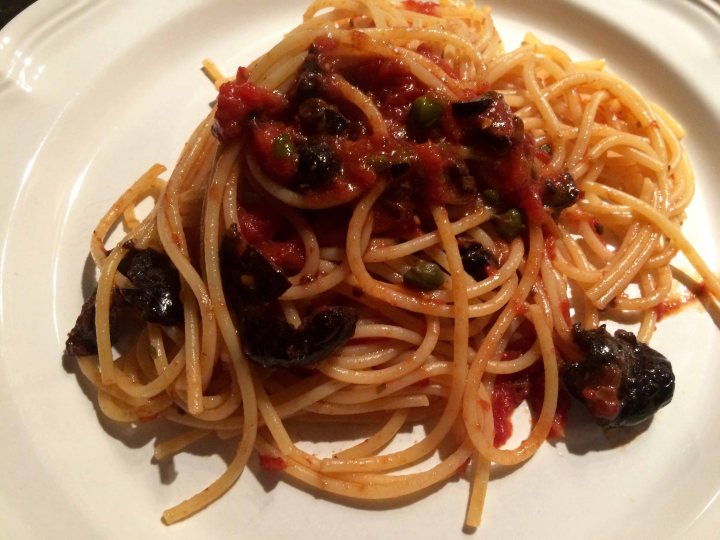 It’s always a pleasure to find serious, well-researched, and eloquently written cookbooks that, like those of Elizabeth David and Alice Waters, promote and celebrate seasonal cooking. Recently, I came upon such a cookbook: The Seasons of the Italian Kitchen

Looking through the book’s summer section, I found a recipe for one of my favorite pastas: spaghetti alla puttanesca (spaghetti in the style of the prostitute). Although I’ve made this dish many times before, I was intrigued by the recipe’s instruction to make a fine mince of two of its main ingredients: the capers and half of the olives. I discovered that this simple step shifted the focus of the dish from the tomatoes and emphasized its olive and caper flavors, which was in line with the authors’ belief that true puttanesca is “not so much a tomato sauce with olives as an olive sauce with tomatoes.”

I adapted the book’s recipe to our tastes and used considerably more anchovies and capers than called for and opted for the stronger flavor of oil-cured black olives. Unable to find good tomatoes, I also substituted the canned San Marzano variety.

I must admit that this version of puttanesca was the best I’ve had and it made the perfect dish for a hot summer night’s  dinner on the terrace. 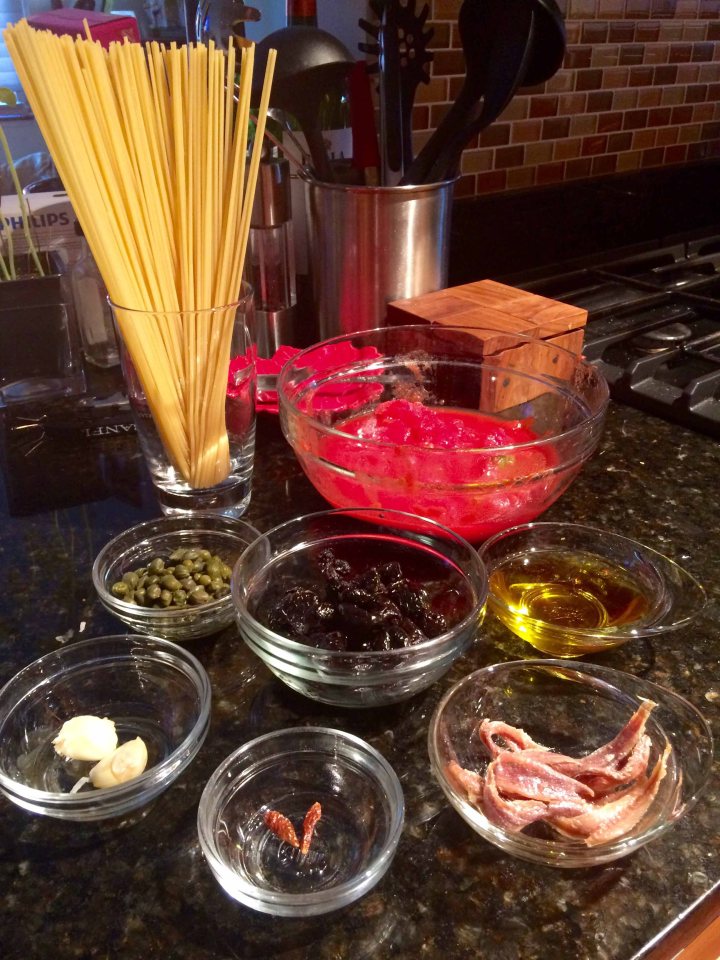 Directions
Mince the capers together with half of the olives.

In a large skillet, heat the olive oil, garlic, and peperoncino and sauté until the garlic just begins to turn a light gold. Be careful not to burn the garlic. Remove the garlic and the peperoncino.

Add the anchovies and sauté, stirring until they dissolve.

Add the minced capers and olives, followed by the tomatoes and whole olives.

Reduce the heat and simmer covered for 10 minutes, stirring occasionally.

About a minute before the pasta is finished cooking, using tongs transfer the pasta to the skillet and finish cooking the pasta in the sauce.

I do not recommend serving cheese with this dish.