“Best.” In the six years that I’ve been writing this blog, I don’t think I’ve used the word too often. But after preparing the recipe for Braised Oxtails with White Beans, Tomatoes, and Aleppo Pepper from “America’s Test Kitchen” on PBS, the subject of today’s post, I believe it ranks among the best dishes I’ve ever prepared. In fact, I can easily say that I’ve never made a better braise in all my years of cooking.

There are several reasons for this accolade. The first is the deep and complex flavor of this braise, which I attribute largely to the two-step browning of the oxtails in a 450°F oven for over an hour. After the first 45 minutes, the excess fat is drained from the roasting pan and the meat is returned to the oven for an additional 15 to 20 minutes. This extended browning developed rich beef flavors that I’ve never achieved on the stove top. It also created a rich fond on the bottom of the pan that carried the flavor through to the sauce. One other advantage of this browning method is a clean stove top.

The second reason is the richness of the sauce, which I attribute to straining the braising liquid through a fine sieve and separating the solids. After the solids are returned to the pan, the liquid is defatted with the help of a fat separator. This step, along with draining the fat after the first hour of browning, eliminated so much of the fat that, all too often in a braise, obscures the flavor of the sauce. It also improves the texture of the sauce. Deglazing the roasting pan in which the oxtails are browned and scraping up the dark fond also adds plenty of flavor.

The third reason, again related to flavor, is focus. A minimal number of aromatics (an onion and a carrot, and six cloves of garlic), a single spice (dried Aleppo pepper), and one herb (fresh oregano) blend harmoniously with the canned plum tomatoes and tomato paste to create a sauce, heightened at the end with a splash of sherry vinegar and a second dose of fresh oregano, that allows the meaty flavor of the oxtails to shine, supported by buttery navy beans.

When we watched this recipe being prepared on television, the chef said it only gets better when reheated. Both of us now can hardly wait for the leftovers later this week.

The recipe, along with a video of its preparation and some helpful advice about buying oxtails and an explanation of why the recipe works, is available online here. To access it, you may need to sign up for a trial subscription.

Directions
1. Adjust oven rack to lower-middle position and heat oven to 450°F degrees.
2. Pat oxtails dry with paper towels and season with salt and pepper. Arrange oxtails cut side down in single layer in large roasting pan and roast until meat begins to brown, about 45 minutes. (Be liberal with the salt and pepper given that there’s so much fat to the meat.)

3. Discard any accumulated fat and juices in pan and continue to roast until meat is well browned, 15 to 20 minutes. Transfer oxtails to bowl and tent loosely with aluminum foil; set aside.

4. Stir chicken broth into pan, scraping up any browned bits; set aside.

5. Reduce oven temperature to 300 degrees. Heat oil in Dutch oven over medium heat until shimmering. Add onion and carrot and cook until softened, about 5 minutes.

6. Stir in garlic, tomato paste, Aleppo, and 1 teaspoon oregano and cook until fragrant, about 30 seconds.

7. Stir in broth mixture from roasting pan and tomatoes and their juice and bring to simmer. (Leave the tomatoes whole.)

8. Nestle oxtails into pot and bring to simmer. 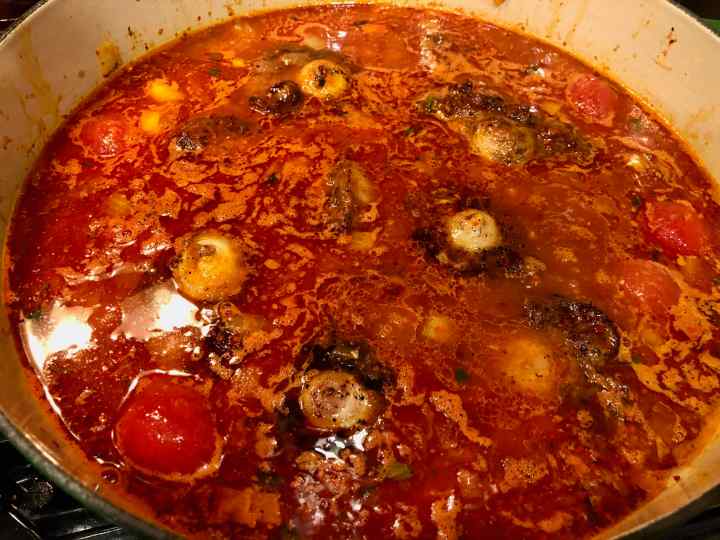 9. Cover, transfer pot to oven, and cook until oxtails are tender and fork slips easily in and out of meat, about 3 hours.

13. Return oxtails and any accumulated juices to pot, bring to gentle simmer over medium heat, and cook until oxtails and beans are heated through, about 5 minutes. Season with salt and pepper to taste.