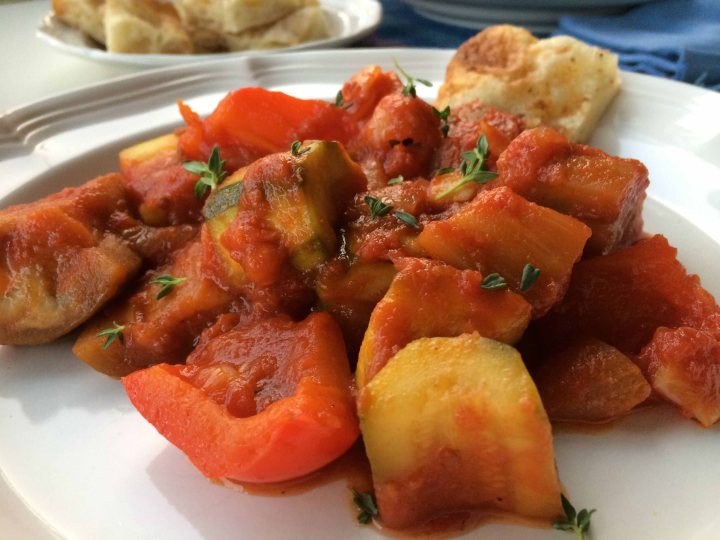 When I was at our greengrocer yesterday, I spotted some beautiful Holland eggplants, deep purple in color, firm to the touch, heavy for their size. And right next to them, were some local zucchini looking equally as good. With these in my basket, I decided it was time for ratatouille. Unfortunately, I wasn’t lucky enough to find some equally good tomatoes. Nevertheless, I stayed with my original decision and bought the other ingredients onions, bell peppers, fresh thyme.

When I got back home, I searched for some recipes and found one from Martha Stewart that appealed to me because it called for large, chunky pieces of vegetables. However, its directions included some steps, like roasting individual canned tomatoes for 30 minutes and sweating eggplant with salt, that I didn’t feel necessary.

My go-to brand of canned tomatoes always have plenty of flavor and I thought rather than turning on the oven, I could get the roasted flavor from toasting some concentrated tomato paste in my pot along with the vegetables. I also find more and more that today’s eggplants aren’t as bitter as they once were and therefore the typical salting process isn’t as necessary as it once was.

I also digressed from Martha’s recipe in the timing. I thought her suggested times for cooking the vegetables were too short. I’m old school Italian and like my vegetables a little more cooked than more trendy recipes suggest. I remember how, when nouvelle cuisine was in vogue, I once served string beans to my aunt and she took them back to the kitchen and sautéed them in olive oil and garlic. She returned them to the table and announced, “Now these are beans cooked for people not for rabbits.”

In a large non-reactive Dutch oven, preferably enameled cast iron, heat 4 tablespoons olive oil over medium heat. Add onion and cook, stirring, occasionally, until translucent. (Martha suggested 5 minutes; because of the size of the onions, I cooked mine for closer to 10 minutes.)

Add garlic cloves and cook until onions and garlic are soft. (Again, I cooked mine for about 10 minutes as opposed to Martha’s 5.)

Add peppers stirring and cook until tender. (Martha called for crisp-tender and 4 minutes; I went closer to 10.)

Add tomatoes, eggplant, zucchini, bay leaf, fresh thyme to the pot. Cook, stirring occasionally, until mixture come to a simmer. Reduce heat to medium low, partially cover, and cook at a gentle simmer until vegetables are cooked through, around 30 minutes. If sauce becomes too thick or starts to stick while cooking add a couple of tablespoons of water from time to time.
(Martha says to cook the vegetables are “tender but mushy, 15 minutes.” I almost doubled this time and my vegetables, perhaps because of their heft did not become mushy.)

Season to taste with vinegar, salt, and pepper. Remove bay leaf. (The vinegar is an essential part of the seasoning, adding a lot of brightness to this dish.)

I served the ratatouille accompanied by some crusty cheese focaccia.

Here’s a link to the original recipe on Martha Stewart Living.