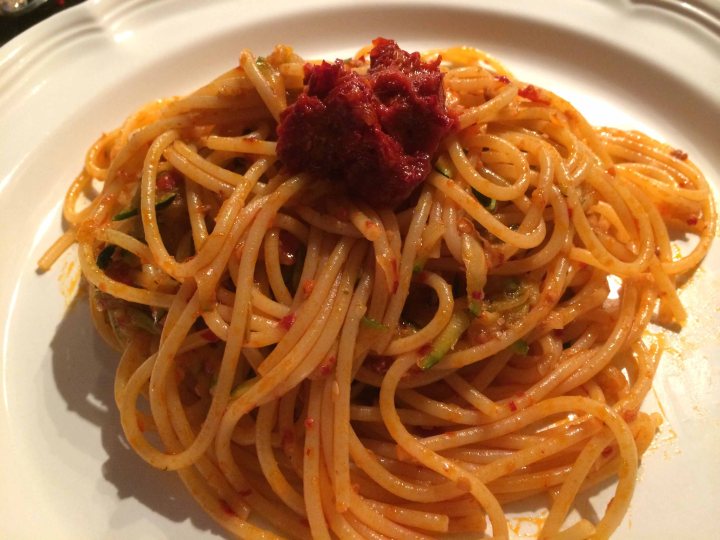 Despite the noise, crowds, traffic, costs and other negatives of living in New York City, there are plenty of positives and, for me, one of the best is the ready availability of almost any culinary ingredient for most ethnic cuisines.

I was reminded of this yesterday when, paging through an old copy of the now sadly defunct American edition of La Cucina Italiana, I came across a recipe for spaghetti prepared with ‘nduja, a spreadable spicy salume from Calabria. Not at all familiar with this ingredient, a Google search provided me with plenty of background and within minutes I found a source for it a few blocks from home.

This highly spiced, fiery red Calabrian sausage is packed with plenty of flavor and so much red pepper that it’s thought by some to be an aphrodisiac. And given yesterday’s sweltering 90° F temperatures, I thought spicy spaghetti with zucchini and ‘nduja was the perfect dish. The delicately flavored zucchini provide a moderating counterpoint to the raw heat of the sausage.

Bring a large pot of salted water to a boil.

Meanwhile, in a large nonstick skillet, heat the oil over medium-high heat until shimmering. Add zucchini, 1/4 teaspoon salt, and 1 tablespoon water. Reduce heat to medium; cook, stirring occasionally, until tender, about 10 minutes. (Rather than a non-stick, I used a stainless-steel skillet.)

Add half of the ’nduja; stir with a wooden spoon, breaking up the meat, until it has melted into the sauce. Remove from heat.

Note: An internet search for ’nduja should provide sources for purchasing it. In New York City, it is available at Buon Italia in Chelsea Market and I believe at Murray’s Cheese and possibly at Eataly.

2 thoughts on “Spaghetti with Zucchini and ‘Nduja”