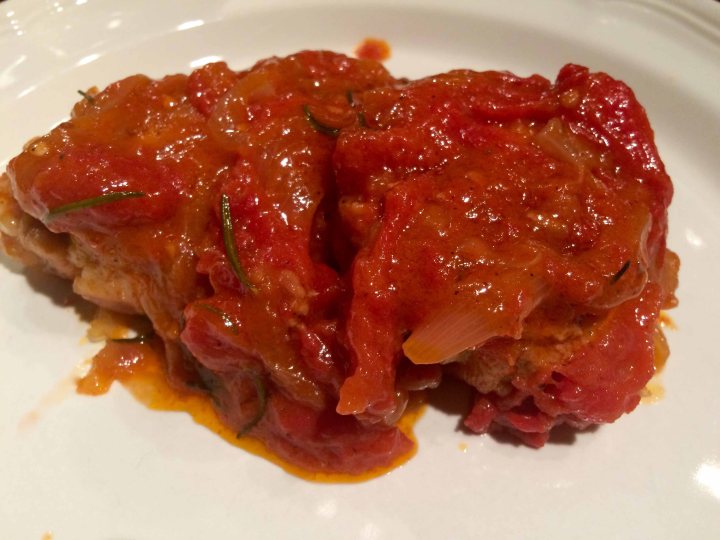 Except for the Italian-American chicken parm, cacciatore  (Italian for hunter’s style) may be the most ubiquitous poultry offering on Italian restaurant menus. As might be expected, given its popularity, there are many variations on the dish both here in the U.S. as well as in Italy. Even at home, my mother and my aunt, Sicilian and Neapolitan respectively, prepared their distinctive versions: my mother’s more savory with capers, olives, and vinegar; my aunt’s more sweet and spicy with onions, tomatoes, and crushed red pepper.

Last night, I chose to prepare a version closer to my aunt’s based on a recipe from Arthur Schwartz’s Naples at Table. This Neapolitan cacciatore epitomizes the simplicity of Italian cooking, calling for just a few ingredients and a minimum of technique. However this austerity requires that the basic ingredients, the prima materia, be of the highest quality—especially the tomatoes. My aunt would use the Roma tomatoes she jarred every August. Working in the confines of a New York City apartment, I rely on the imported canned whole San Marzano variety. As for technique, it’s essential that you take the time to brown the chicken thoroughly and avoid overcrowding the pan to get the most flavor from the bird.

I’m sure many of my readers have their own version of cacciatore and I would enjoy hearing about them. As I said earlier the recipe below is based on one from Arthur Schwartz. The original recipe uses a whole chicken and also includes a variation with red peppers. Here’s a link to the original on the author’s website.

Chicken Cacciatore Adapted from Naples at Table by Arthur Schwartz

1. Season the chicken on both sides with salt and pepper.

2. In a 12-inch saute pan with cover, heat the oil over medium-high heat and when it is hot, brown the chicken on the skin side first, then the underside. Do not crowd the pan. Brown the chicken in batches if necessary, setting aside the browned chicken on a plate until the rest is done.

3. When the last few pieces of chicken are almost browned and still in the pan, add the onion and rosemary sprigs and sauté until the onion is tender.

4. Arrange all the browned chicken in the pan, skin side up, and add the vermouth. Add the hot red pepper flakes, and then let the wine cook until it has almost entirely evaporated, just a couple of minutes. While it is reducing, turn the chicken in the liquid once or twice, but leave it skin side up at the end.

5. Add the tomatoes. Cover the pan, lower the heat, and let cook at a gentle simmer, without turning, for about 30 minutes, or until the chicken is done. Check the pan every so often to make sure the sauce does not stick to the pan.

6. Remove the chicken to a serving platter, increase the heat to high and let the sauce reduce for about 2 minutes. Adjust for seasoning.

7. Pour the sauce over the chicken and serve immediately.