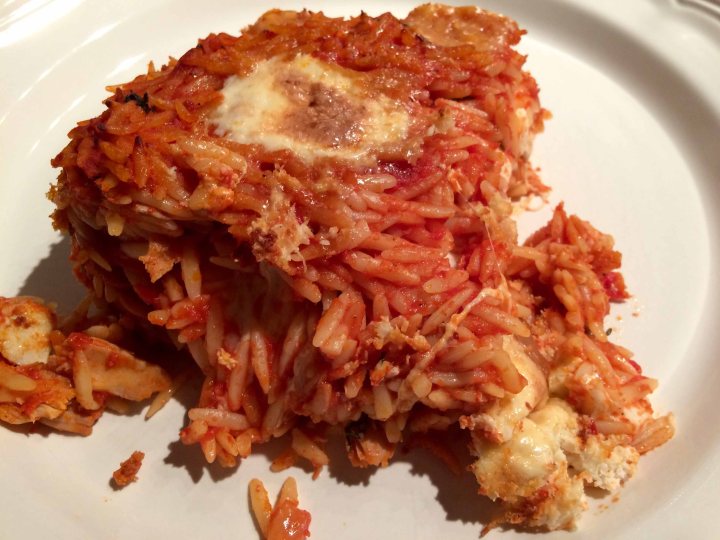 Because I cook at home almost every night, our refrigerator is often at its max capacity. As I triage the remainders of meals gone by, tossing out wilted parsley, a shriveled zucchini, and sundry unidentifiable objects, I often find some salvageable items. Such was the case yesterday, when I discovered a couple of chicken thighs from Thursday’s cacciatore, a half a bottle of tomato passata from a pasta dish, a half of a smoked mozzarella along with some basil from Friday’s pizza night, and a small chunk of ricotta salata.

After I put these discoveries aside, I rummaged through my pantry to see if there was anything there I could use with them. When I saw a box of orzo and a canister of bread crumbs , I thought why not make a small timballo, in other words, bake the orzo along with the other ingredients.

I removed the skin and bones from the two leftover chicken thighs, pulled the meat apart, and placed it together with the sauce from the cacciatore into a 2.5 quart saucepan. To supplement the scant sauce, I added the half bottle of passata and some chopped basil to the pan, which I covered and placed on a low flame for about 20 minutes.

While the chicken and sauce were reheating, I cooked 8 ounces of the orzo until just a few minutes before it would reach al dente and then drained it well. Meanwhile, I cut the smoked mozzarella into chunks, grated the ricotta and some Parmigiano-Reggiano, and finally buttered an 8” x 8” baking dish, which I dusted with a couple of tablespoons of dried breadcrumbs.

After the chicken and sauce were fully reheated, I stirred in the orzo and let it cook for a few minutes so that it would be infused with the sauce. I then tasted it and adjusted for seasoning, with some salt and freshly ground black pepper.

I placed the baking dish into a preheated 375° F oven and baked it for about twenty minutes. When it was finished cooking, I removed the dish, tented it with some foil, and let it rest for about 10 minutes so that it would firm up a bit.

I must admit this dish was delicious and turned out far better than I had thought it would. (In fact, that’s one of the reasons I have no photos, as I usually do, of its preparation.) The pasta was richly flavored, the chicken succulent, and the melted cheese, creamy and piquant, tied everything together. Yet what was even more satisfying was being able to create this dish from what could have easily found its way into the trash. My frugal mother would have been proud.